Mob Grinding Tools Mod (1.19.2, 1.18.2) is a mod that encourages players to find new ways to farm mobs to earn experience and drops. The mod contains a fully modular system that players can explore and use to make the most of their mob farms. 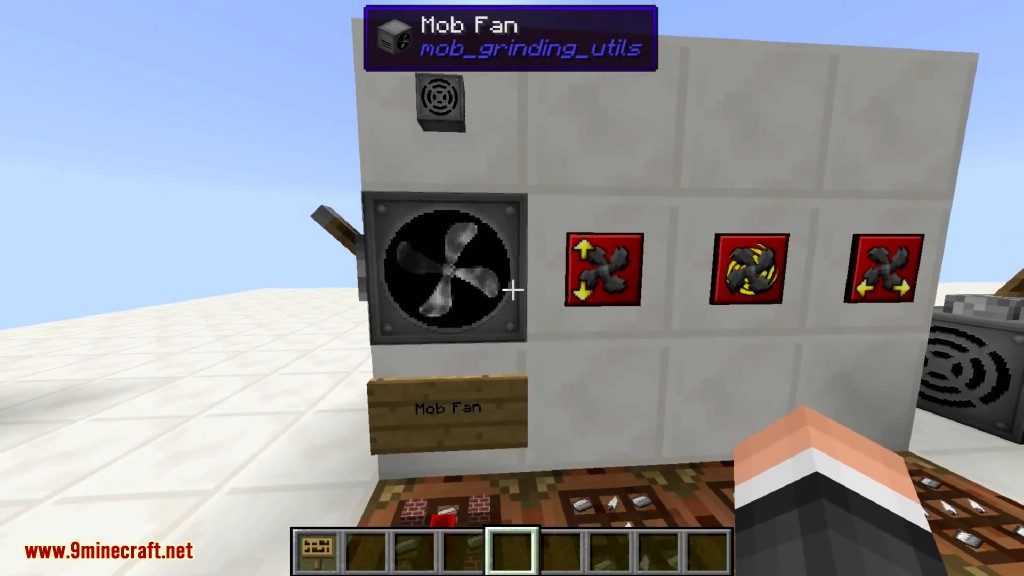 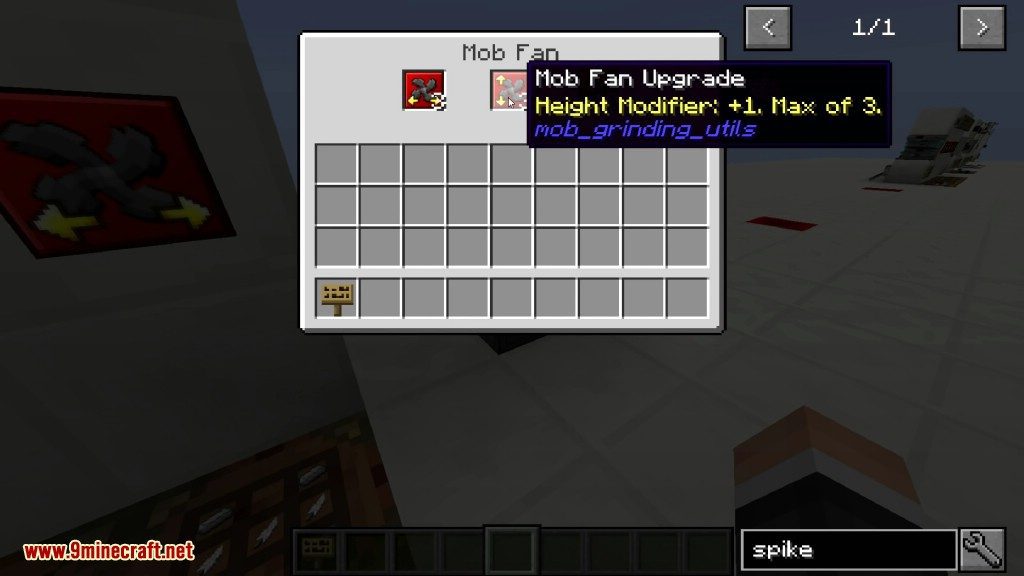 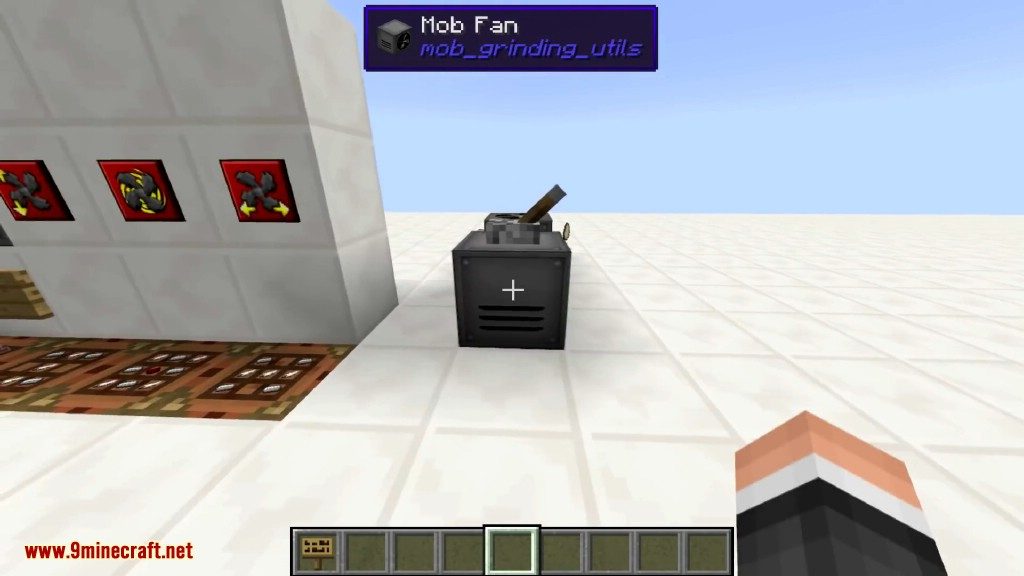 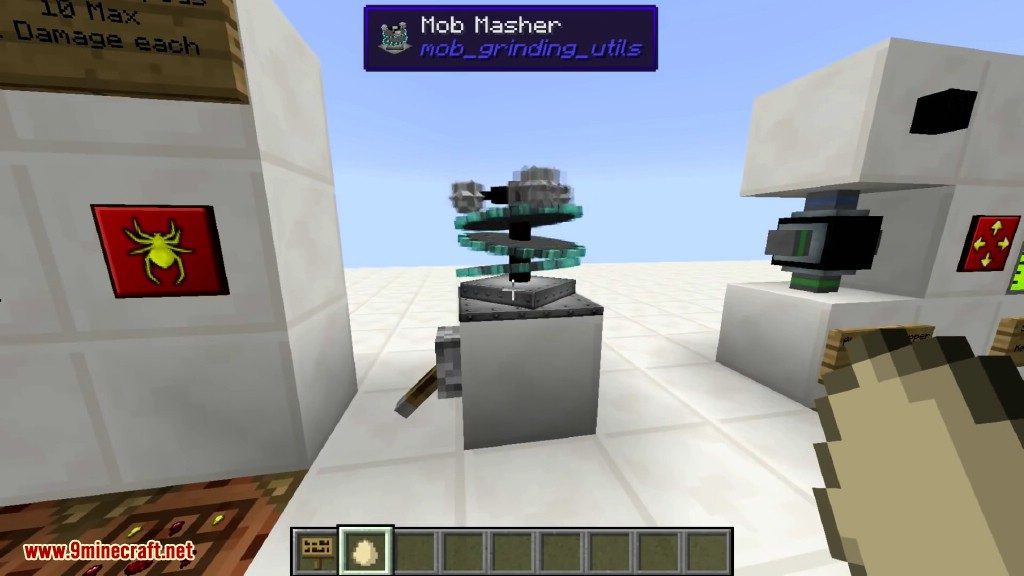 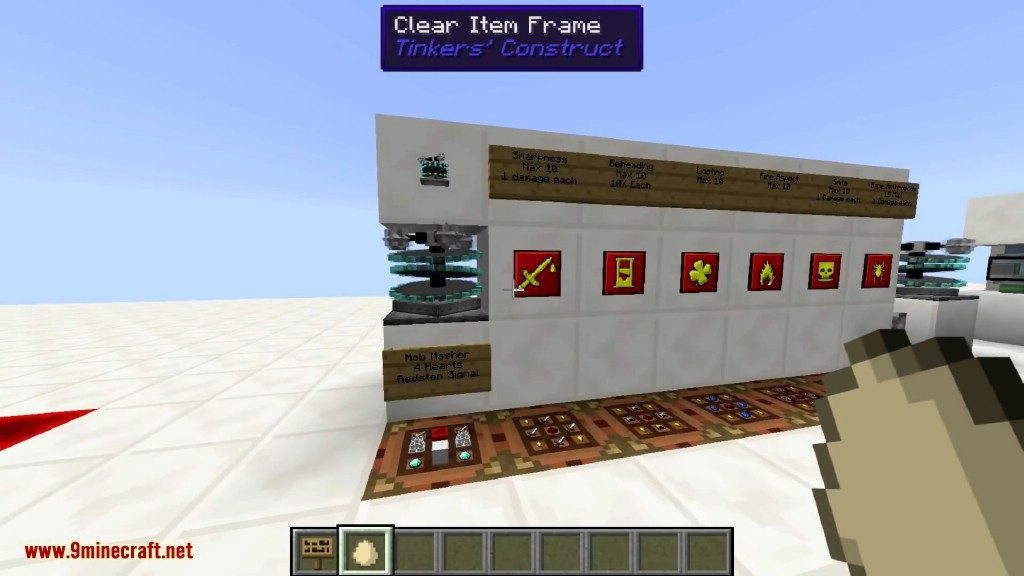 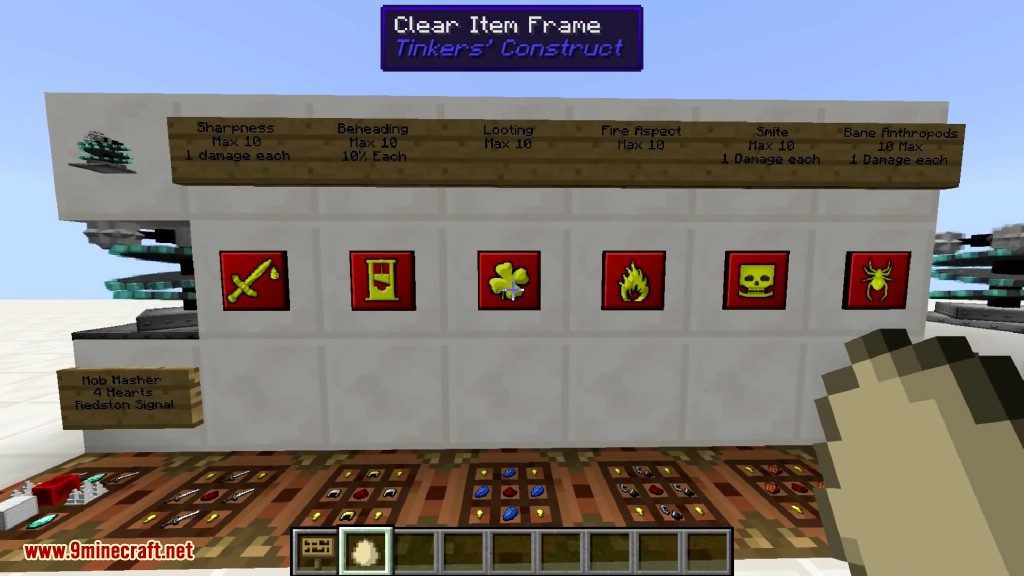 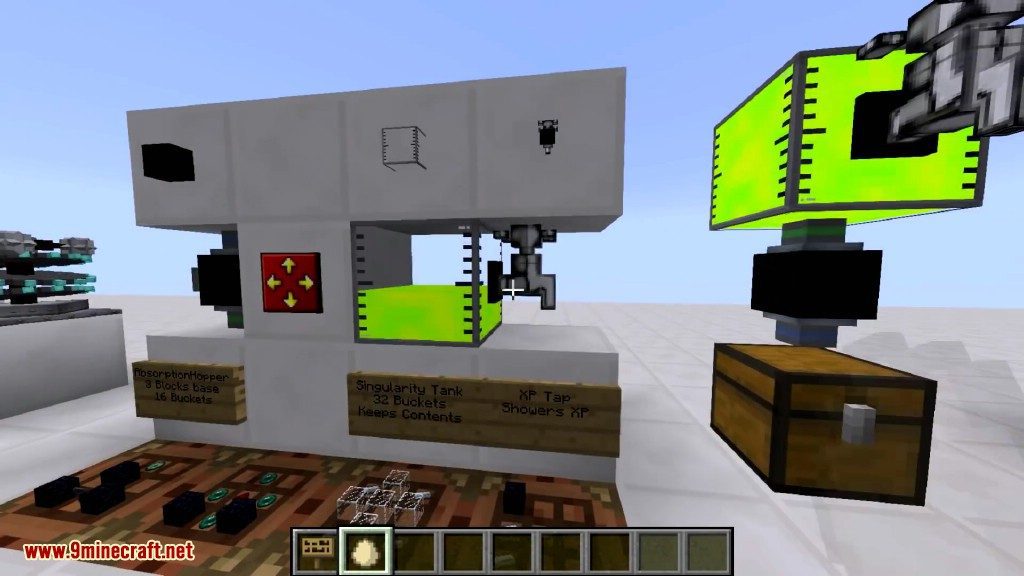 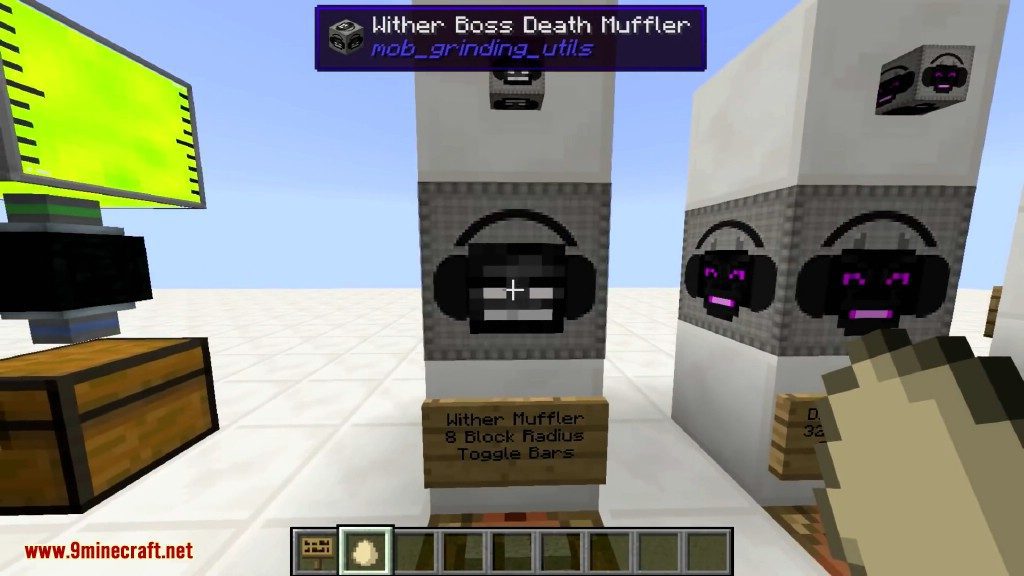 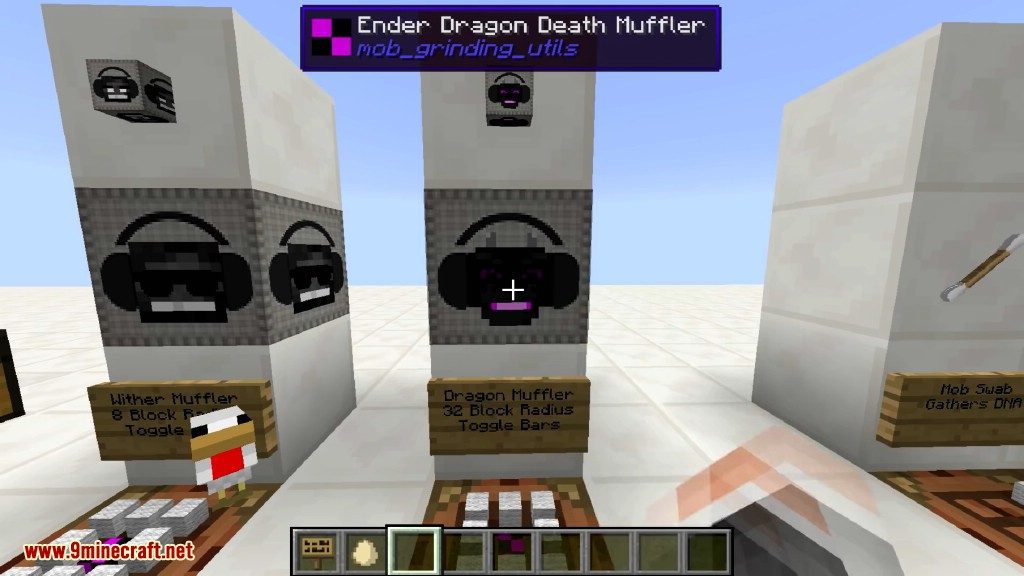 Moves Mobs & Players in the Direction it Faces

Mob Fans are designed to allow players to push mobs all over the place in all directions even vertical. The Mob Fan Block has 3 upgrade options to expand it’s capabilities – Width, Height and Distance modifiers. Click the block to Open a GUI to add upgrades. Mob Fans are activated with a redstone signal and can also be used to move players. Placing a single block anywhere in the direct path of the Mob Fan will limit it’s range to that block. Mob Launchers and Air Elevators are some of the fun ways these blocks can be used.

Sucks up Items and XP Orbs and distributes to Inventories & Tanks

Breaking an Absorption hopper will drop all the items it contains but the fluid will be lost.

The XP Tap can only be placed on the side of a Singularity Tank. The XP Tap can be turned on and off when required to convert Fluid XP, contained in the tank, back in to XP Orbs for when you need to top up your XP levels.

Iron Spikes are a basic block that can be placed on any side of a solid block. Iron Spikes will damage mobs and players when they come in to contact with them. Mobs will drop XP and their normal drops.

The Mob Masher is a block used to maximise mob drops by being modular with several upgrade options.
Vanilla enchants are available as upgrades beyond normal levels. Click the block to Open a GUI for the upgrades. The upgrades are as follows: Sharpness, Looting, Smite, Fire Aspect, Bane of Arthropods and a special non-vanilla upgrade, Beheading which increases mob head drops (10% per level up to 100%). Compatibility with Ender IO means Enderman heads will also drop if Ender IO is installed. The Mob Masher can be placed on any side of a solid block and is activated via a redstone signal.

Both these blocks work in the same way for their respective boss. When a Muffler is placed in the world the sound of the boss death is negated – this removes the annoying thump heard globally for Wither Boss Farms. The Muffler Block effect has an 8 block radius for sound cancelling. Vanilla now features stacking Boss Bars which can be annoying and take up a lot of screen space – no problem – just click on The Muffler Block and the respective boss bars will be hidden from view (click again to show the bars). The Boss Bar hiding option is player independent not global.

Just a fluid version of XP – Note: If Ender IO or Open Blocks (if/when it updates) are loaded; Mob Grinding Utils will defer it’s registration and textures to the other mod’s versions.

Ever wanted Mob Spawn Eggs to drop in Survival ? Well, the Mob Swab enables this function. Just use a Mob Swab on the mob you want the egg for and it will retain that mob’s ‘DNA’ and give you a Used Mob Swab. Then craft the Used Mob Swab with Seeds and a Bucket of Fluid XP – this will give you some GM Chicken Feed. When you feed a Chicken with the GM Chicken Feed, something magical happens and the Chicken will drop the Mob Spawn Egg you wanted. Mob Spawn eggs (as of MC 1.8+) can be right clicked on to a Monster Spawner Block and will change the spawner to the same mob as the Mob Egg. This means with other mods that allow you to move spawners you can create tailor made mob farms. Note: Vanilla mobs with variants eg. Wither Skeletons, Husks and Donkeys are not supported in this version but are planned for the future. Some mods still don’t register their mob’s spawn eggs correctly and as a result some modded eggs will not work.