Spacecraft Mod adds a couple of cool things off, a space suit made of fabric, a space rocket system, both the moon and other materials also. Saddly so much the mod only has the moon, shortly however, it’ll have the entire solar system. Only Glowstone works to light the moon up, you cant use torches or even redstone lamps (the lever will pop off). To reach the moon, create a portal from iron cubes and light it using the space rocket item, you then are able to set off into space and explore the solar system! In addition, it has an unbreathable atmosphere and all things that dont work without air, torches ect. Will be destroyed and soda off! To live, you’ll need a space suit, this can be made by the recipie in the images above, this will enable you to breethe in the moons atmosphere, aswell as under water! 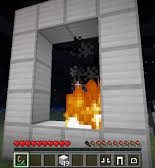